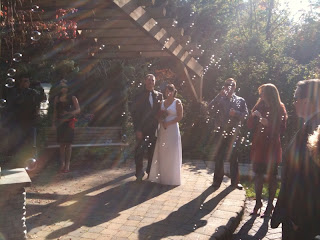 It wasn't a big affair this weekend when I married off Kyle and
Cashmere- just them and a dozen or so family and friends. But it was
beautiful.

We did the wedding at Sendall Gardens and the sun was shining so
brightly we all had to squint. The one thing that was apparent is that
these two loved eachother deeply. It was a simple wedding, but a
personal and beautiful moment as these two became husband and wife.

Whether you're having a big event or a simple ceremony, creating a
beautiful, meaningful exchange and capturing a moment to look back on
is so important. That's what we try to do for the couples we marry.

All the best to Kyle and Cashmere!

Posted by Jenn Bateman at 9:59 AM No comments:

I'm often asked what I do in "real" life--you know, when I'm not marrying people off. Well, I'm a writer. I was a newspaper reporter for several years, but have spent the past eight years doing freelance writing of all sorts--everything from short articles to ghostwriting books. And now, I can add an iPhone/iPad app to that list.

A few months ago, three local guys (Jason Ballard, Josiah Peters and Darian Kovacs) tracked me down and got me involved in writing DateBank, an iPhone app that helps guys plan fun, creative dates. The lads had brainstormed a number of ideas, and I helped them flesh them out (and popped in a few dates of my own). It was a lot of fun, and a chance for me to use all of he crazy pop culture references that bounce around my head. This weekend, the DateBank app launched in the iTunes app store. It's fun, easy-to-use, and full of great, wholesome date ideas.

It's important for any couple--whether they have been dating for just a few days, or have been married for a hundred years, to stay creative and proactive in making plans together. Hopefully, this little app will help couples keep that spark alive!

Jenny and I had a busy weekend, with four weddings between the two of us.

Thanksgiving is a great day to get married. I've done a few on Thanksgivings now, and they have all been memorable. A few years back, I married a couple in Williams Park (in Langley) on Thanksgiving Saturday. It was a beautiful fall day, sunny and warm, but with that crisp autumn wind we all love. Big orange maple leaves fell behind me as I pronounced them. It was perfect.

Last Thanksgiving, I married off my friends Kareem and Heidi on the beach in Tofino. This was another amazing day, and the best sand ceremony I had ever been a part of. Kareem's father brought golden, shimmering sand from his home country of Egypt, while Heidi's relatives brought dark, rich sand from Holland, where her parents were born. Then they added a scoop of Tofino beach sand--where they had got engaged and married. It was meaningful and richly symbolic. (Happy anniversary, by the way!)

This weekend, I did a wedding at the White Album Chapel in Chilliwack for the first time. It's a great spot--a 125-year-old country church. Courtney (the bride) and the girls were a little bit late, but I think Mike (the groom) felt it was worth it.

Later Saturday, I married off Joe and Leah. They had hoped to do the ceremony outdoors, but the weather at Newlands wasn't great, so we moved inside. It was still a lovely ceremony and the two of them giggled and teared up--all the great emotions of a wedding rushing to the surface at once.

Finally, yesterday, I did a ceremony at Chateau Cargill for Zaher and Sheena. They hit a weather home run--yesterday was beautiful. Sheena looked like a wedding princess in her beautiful dress (with a long train and tiara). It was a good day.

Jenny did a wedding at the Peace Arch, but I'll let her tell you her border story another time.

Anyway, Thanksgiving is a great option for people who want to get married at a different time of year. The weather is usually pretty good, and it's a natural time for friends and family to gather.
Posted by Anonymous at 9:56 AM No comments:

Welcome to our blog, where we'll post thoughts on being married, being in loved, weddings, and stuff we like. For our full wedding chaplaincy website, visit www.jjweddings.ca.
Check out our PopMarriage podcasts here at www.jjweddings.podbean.com or on iTunes (search PopMarriage in the iTunes store).

We can be reached at weddings@jordanbateman.com.