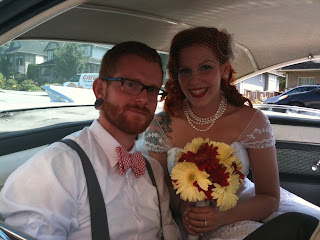 Good fun again today as I got to be part of Dirk and Jackee's fun and fabulous
wedding with a retro 60's diner theme. Girls rocked some adorable yellow
dresses and red lips, boys decked out in checked bow ties and gorgeous Jackee
looked perfect with her pin curled hair and crinoline skirted dress.

I tried to look the part too with a red flower in my hair and red lips and
nails.

Most fun part was when the entire wedding party danced our way back down the
aisle to 'You Make My Dreams Come True by Hall&Oates. They all looked like they
were having a blast!

I snapped this pic of the couple in their pink vintage Bel-Air before they left.
Cute, right?

Posted by Jenn Bateman at 8:24 PM No comments:

Cool Twist on the Sand Ceremony 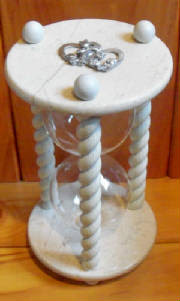 Last week I had a chance to marry Shawn and Geneva at Chateau Cargill. Instead of a regular sand ceremony they did a sand ceremony using an hourglass. It was the first time I had seen one (found online here).

During the ceremony I gave this description as they poured the sand:

"For the sand ceremony, each of them has a container of sand which represents their life each with all of it’s many parts and beautiful color. Today these lives are joined together. As these two containers of sand are poured into the third container, the individual containers of sand will no longer exist, but will be joined as one. Just as these grains of sand can never be separated and poured again into the individual containers, so will your marriage be.

Shawn and Geneva’s ceremony is a bit different as the vase is being replaced with an hourglass. In the beginning the colours will be separate but every year on their anniversary they will turn the hourglass over. Each year the colours will mix a bit more until the sands are all one colour. This is to symbolise the merging of two families and the creation of a new family as the years go on."

It's nice to see something new and I especially love the idea of turning it over every year on your anniversary.
Posted by Jenn Bateman at 8:28 PM No comments:

Welcome to our blog, where we'll post thoughts on being married, being in loved, weddings, and stuff we like. For our full wedding chaplaincy website, visit www.jjweddings.ca.
Check out our PopMarriage podcasts here at www.jjweddings.podbean.com or on iTunes (search PopMarriage in the iTunes store).

We can be reached at weddings@jordanbateman.com.